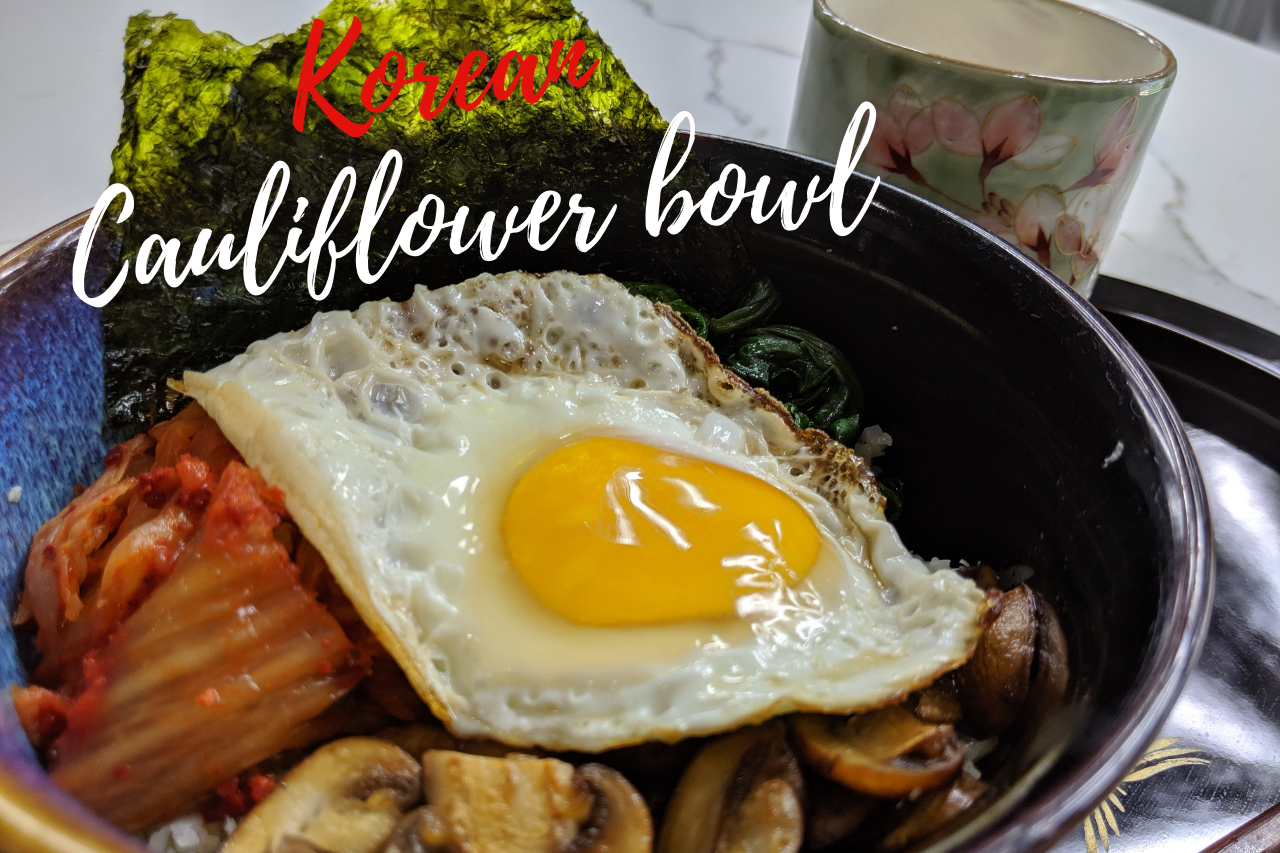 My 10-Minute Mandarin Chicken Bowl was pretty popular so I decided to develop another tasty Asian cauliflower bowl. I might even say, I like this one better.

One of my favorite things to order at a Korean restuarant is bibimbap in the stone bowl. Mmm it’s so yummy, I get hungry thinking about it. I don’t eat a lot of rice anymore but I still like to enjoy all the flavors of Asian cuisine. Just because you don’t eat a lot of rice, doesn’t mean you can’t indulge in tasty Asian food.

I knew I could come up with a quick version of a low-carb bibimbap inspired Korean bowl with my trusty cauliflower rice serving as the base of this dish. I mulled over so many options: vegan, vegetarian, carniverous, Keto and Paleo. After some thought and experimentation, I ended up with a vegetarian, gluten-free and low-carb version. The ingredients can easily be replaced to make a meat, Keto or Paleo version, but I wanted to stay as close as I could to the original version of this dish (eh hem minus the rice of course).

As much as I wanted to keep the gochujang, it contains wheat, rice, corn syrup and all sorts of no nos. That was a sad thing to discover. I did add kimchi to this dish to bring the chilis and some heat. I don’t know why I always think of Bobby Flay when I say the word “chili.” Anyone else? Anyway, kimchi is often made with anchovies or shrimp so if you’re a vegan or vegetarian, read the labels. If you’re not vegan or vegetarian then it shouldn’t be a problem. One other thing to note is that a lot of time, glutenous rice flour is used as a thickener so if you’re grain-free, watch out for that too.

Kimchi has become very popular and you should be able to find it at most large grocery stores such as Safeway/Albertsons (This one is vegan and grain-free). Target also carries kimchi but this one is not vegetarian. If you cannot find premade kimchi in your area, you can substitute it with a quick Sriracha and miso sauce. The Sriracha has a little sugar but you’ll only use a small amount. Now, it’s debatable if miso is Paleo or Keto. I’ve read that because the soybeans have been fermented, most of the toxins are eliminated and therefore is ok on Paleo or Keto. You will have to make up your mind on that.

Korean seaweed is one of my favorite snacks. You can buy it at most Asian grocery stores but you can also get it at Costco or Trader Joes. They aren’t labeled as Korean seaweed though. The one I get at Costco is a Kirkland brand but made in Korea. They come in small packs and are salted and roasted in sesame oil.

I’ve been cutting out my meat consumption so I opted for mushrooms instead and I have to say, I did not miss the meat at all. I like to slice them on the thicker side so they have a nice bite to them. I used crimini mushrooms but you can use fresh shiitake mushrooms if they are readily available in your area.

Step By Step Instructions with Photos

1) Start by defrosting the cauliflower rice in the microwave. While you’re working on that, get started on the egg. Get your little pan screaming hot and in the meantime, wash your mushrooms and slice them. Slice them on the thicker side (1/4 inch thick).

2) When the pan is hot hot hot (but not burning), add 2 teaspoons of the sesame seed oil and drop the egg.

3) While the egg is cooking, get another pan hot and add 2 teaspoons of the sesame seed oil. Next, add in the mushrooms in one layer. This will help them to caramlize and become the “meat” of the dish. Tip: once all of the mushrooms are flat and in 1 layer, don’t touch them for 1.5 – 2 mins. Once they have added some color, flip them and cook for an additional 1 – 1.5 mins and season with salt. When they are done, set them aside.

4) When the egg is done and the mushrooms are doing their thing, add the cauliflower rice to the same pan as the egg and cook off the water. This step helps dry out the cauliflower and helps with the rice like consistency. You don’t need to add oil because of the moisture in the cauliflower.

5) When the mushrooms are done, add the remaining teaspoon of sesame seed oil to the pan and add the spinach. I’m using mixed power greens with spinach, kale and chard here but spinach is more traditional. As long as they are prewashed and ready to go, it’ll speed up the process a little. Wilt them for about 1 minute and season with a little salt.

handhconnection
Vegetarian, Gluten-free and low-carb. Whip this up on a busy night or double the recipe and have leftovers for lunch the next day. This easy low-carb cauliflower rice bowl has all the flavors of a bibimbap and none of the heaviness of a traditional rice bowl. If you use 2 small frying pans, you could probably get it done in 12 mins. 🙂
Print Recipe
Prep Time 5 mins
Cook Time 10 mins
Total Time 15 mins
Course Lunch or Dinner
Cuisine Asian, Korean
Servings 1

Tip: Seasoning goes a long way with this dish. Don’t oversalt each component but make sure each item gets some seasoning love.
Keyword Bibimpab, Gluten-free, Low-Carb, Vegetarian