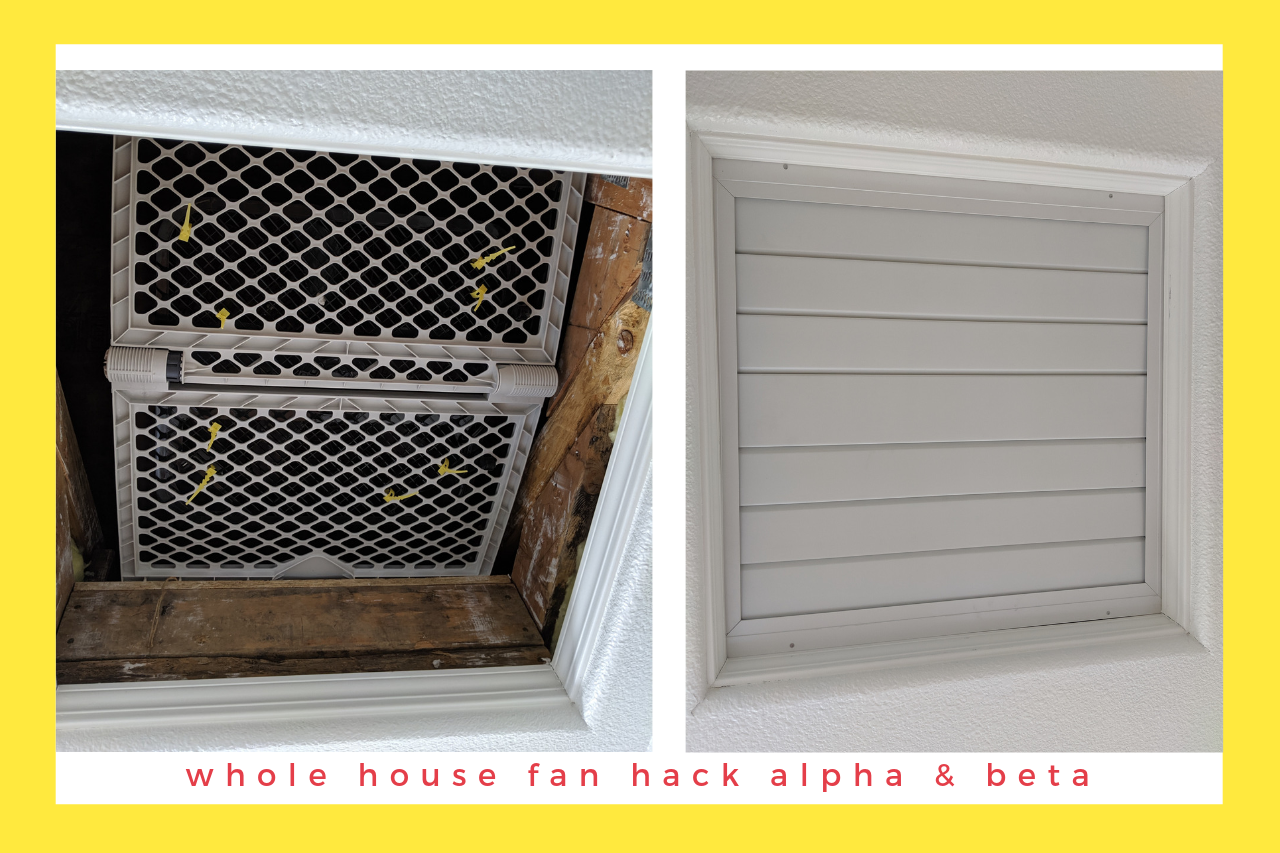 It’s summer time and that means hot weather in most places. It’s so easy to leave the air conditioning on during the day but it’s good to turn it off in the evening. Leaving your air conditioning on all night can run up your energy bill easily. If you live in a hot climate that cools off at night you may have tried opening your windows and used fans to suck air in or out of your house to no avail. Last year, I moved to an area that gets up to 105 F in the summer. There’s always a point in the evening when it starts to cool off outside and it heats up inside. I’ve turned on the air conditioner but all that does is cool it off temporarily and as soon as I turn it off, it always heats up again even though it’s cool outside. WTF? Right?

A couple of years ago, a friend of mine told me that she and her husband bought a whole house fan for their 10-year anniversary. I didn’t know at the time what a difference it made in their house and forgot about it until recently. The other day, they invited us over for dinner and it happened to be a warm day so they turned on their whole house fan. I was facinated by how it worked. First you have to open the windows in your house. Secondly, it has to be cooler outside compared to inside your house for it to work. The fan is attached horizontally to the ceiling and sucks in the cool air from outside and pulls it into the attic. The hot air then leaves the house through the attic vents. If you have an attic fan, that will also help the process. See the photo below:

I was surprised at how quickly and efficiently it worked. They have a two-story house and the whole house fan really helps with the second story.

Hubby and I went home and brainstormed ways we could get our hot little hands on a whole house fan. My friend told me it was a couple of grand to have everything set up and installed. We were convinced that there would be a more economical way to do it but we would just have to get creative.

We were using a 3-speed box fan in one room to pull in cool air and a window fan in another room to push out the hot air. We also had another large fan that we were using to cirulate the air in the hallway upstairs. We decided to use these fans to create an Alpha version of our whole house fan.

We didn’t want to start cutting open holes in our ceiling so we used our attic access which happened to be a perfect square. It was the perfect place to test our whole house fan hack.

We positioned the fan so that it was sucking the hot air from the second story into the attic.

We then used the remote switch to turn the fan on and off so we didn’t have to go the attic every time we wanted to turn it on.

An that’s it! Our whole house fan Alpha version was born. We tested it out and were pleasantly surprised to see that even a relatively inexpensive fan without a lot of power could significantly lower the temperature on our first and second floor. The first floor was almost as cool as outside within 30-mins to an hour and the second floor was still a little warm but worked much better than the method we were using before.

We were ready and excited to see how an actual whole House Fan would work. Hubby did all the research and found that the power and strength of a whole house fan is measured in CFM (cubic feet per minute). For example, a 3000 CFM fan can move 3000 cubic feet of air from one side to the other in one minute.

Calculate the CFM for Your House

There is an upper limit for the fan power, which is 750 CFM per sqft of ventilation. In order to calculate the appropriate level of CMF for your house, first calculate the total square footage of the vents in your attic. We have four 1 ft x 1.25 ft vents so we have a total of 5 sqft of ventilation. Each sqft can naturally release 750 CFM. Therefore, we multiplied 750 by 5 which equals 3750 CFM. This is the maximum strength we can use for our house.

Note: we did see that a number of whole house fans went by the total square footage of your house but according to the research, the most accurate way to calculate the appropriate CFM for your house is to calculate it with the method described above.

With our more powerful, and not so janky fan in hand, we were ready to set it up in the attic. An important point here is that if you don’t have a square attic access, you may need to cut out a hole in your ceiling to the size of your fan. Because we had a perfect square opening that was 27.5 inches, we decided to find a fan to fit it which was a 24 inch fan. (24 inches is the width of the blades). You’ll have to read the fine print on the fan decription and do some measuring to see what will fit.

You might be asking why this is still a hack if we’re using a whole house fan. There are 3 reasons:

Initially, we thought we wouldn’t have to build a box around the vent but as it turns out, we had to. We purchased 2 pieces of wood from Lowes and cut them into 4 boards that were 27(3/4) x 4 x 3/4 inches. We used a table saw and cut the pieces of wood at home. If you don’t have a table saw, you can use a hand saw, but I would recommend utilizing the wood cutting services at Lowes or Home Depot. Before you go to the store, have all of your measurements ready because once, you leave the store with your items, they won’t always let you bring it back to have it cut. Things to take:

Once you make the box, attach it to the vent by nailing or screwing it into the holes provided on the front of the vent. Ours had 8 holes.

The whole house fan Beta was ready to be installed. It took 2 people, some muscle, rope and a ladder to get everything into the attic.

As you can see, there was some space around the access when you could rest the vent over to carry the weight of the fan. The vent, vent box and fan had to be pulled in at a diagnal.

After some testing and set up, the fan was stacked on top of the vent and vent box and was positioned right by the attic access so it could be slid into place. And voila, we had ourselves a powerful and very effective whole house fan.

Here is the fan at work and just in time for the heat wave coming up this weekend.